Is Fluorescence in Diamonds Good or Bad?

While others look for a diamond with some fluorescence, because they know that there are some benefits (in some cases) for having a fluorescence, why is that? And who is right among them?

Look at this 1 carat, I-VS2 Excellent Cut diamond, and then compare it with this “almost” identical diamond but with a faint fluorescence, here are both diamonds side by side:

Under regular lights, you will never be able to detect any difference, and that’s why you need to well-understand what diamond fluorescence is, and when you can be safe getting a diamond with some fluorescence.

Over the years, there has been a growing misconception about the fluorescent property of diamonds, some regard it as a good feature while the others say it’s bad.

Are diamonds with fluorescence really bad like they say?

Both diamonds we saw above look nice, and since we know that even both diamonds have excellent cut, one might be better than the other, same for clarity level, having this in mind, we can assume that most probably the latter one (with some fluorescence) has better cut or clarity (or any other diamond characteristic in general).

That’s why they are both priced similar, having a fluorescence in some cases doesn’t only save you some money, but it also get you a better diamond, and possibly your diamond will look more colorless as we will see later in this post.

Let’s take a look and understand some interesting features of diamond fluorescence and why it should be “sometimes” considered a good feature. Let’s start with an in-depth understanding of its meaning.

Before you complete reading this article, you will understand what does it mean when a diamond has some fluorescence (whether it was faint, medium, or even very strong). Is it always good? Always bad? Or depends on the grade?

What is Diamond Fluorescence?

Let’s start from the beginning, what is fluorescence in diamonds?

When you subject an ultraviolet light (like the sun, fluorescent bulbs, night clubs lights, or any other UV sources) to a diamond, the diamond “may” emit a soft colored glow, this glow is usually blue, that’s why you will see most images refers to diamond fluorescence with a blue color, like the one you see here: 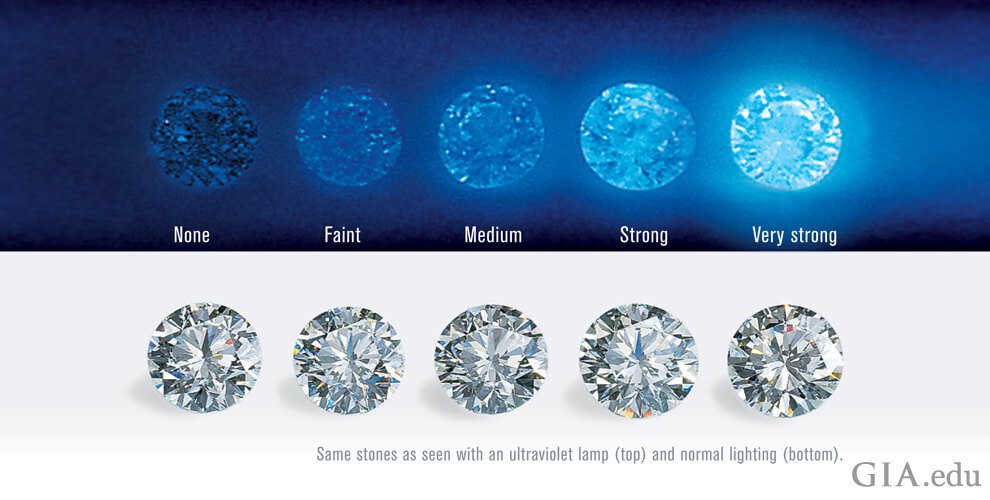 According to the Gemological Institute of America (GIA), the reactions from diamonds are being graded into 5 levels: Very strong, Strong, Medium, Faint and None in a descending order.

People usually doesn’t prefer the last one (very strong blue fluorescence), and 99% of the time they are right, why? Keep reading…

Under normal light condition, you can barely tell any difference between the 5 diamonds (regarding glow), but under an UV light, the diamonds shows different levels of fluorescence, and remember: This only appears under UV, because you can’t (almost) tell a difference under normal lighting (more about this in details below).

It’s worth to mention that a well-trained eye can notice the difference in ordinary lighting.

Read: Can I Tell Diamond Color By Just Looking?

What Causes Fluorescence in Diamonds?

Getting a diamond with no traces of chemical compounds, more like pure diamonds rarely occurs.

When diamonds undergo the processing stage, some compounds are being absorbed, which causes the reaction to ultraviolet rays, the 3 main compounds include – aluminium, boron, and nitrogen. When a diamond fluoresces, it is said to contain one of these compounds.

In numbers, around 25% – 35% of natural diamonds have fluorescence, in all various levels of it.

How Common is Fluourescence in Diamonds?

It’s very common, GIA said that in the past decade, they have witnessed fluorescence exhibition (with different degrees) in 25%-30% of all diamonds they assessed.

The vast majority of these diamonds didn’t have a notable fluorescence (they had medium, strong, or very strong), only 10% of them did so.

How to Read Diamond Fluorescence on The Certificate?

When GIA grades a diamond with any level of fluorescence, they are not actually putting them in grades similar to Cut & Clarity, rather, it’s just a clarification (or an identifying characteristic) for the diamond fluorescence.

Why is that? Simply because fluourescence is a personal preference, if you liked how the diamond looks, then it’s yours, because you liked it that way, maybe it has some color (some people like some yellowish diamonds actually).

How is that different from other diamonds characteristics?

Simply because no one can tell you that VS1 clarity is a preference, and if you like SI1, you should go for it! That’s not a preference, that’s a grade for clarity.

It’s worth to mention that when GIA assess a diamond with Medium, Strong, or Very Strong fluorescence, the color of the fluorescence will be noted.

Fluorescence isn’t always blue as many people think, there are different colors of diamonds fluorescence, it could either be a yellow, green, red, blue, orange or even white color (these are the common colors, and there are some others as well), but blue is the most common among them. These colors of diamond are usually noticed when exposed to ultraviolet rays.

The color a diamond gives off is very important and is different, so a medium blue fluorescence will have a total different effect on appearance from a diamond (same color grade) but with a medium red fluorescence .

Fluorescence gives effect to colorless or colorful diamonds. Blue fluorescence is the most common color a colorless diamond gives off. If it’s a yellow diamond the fluorescence won’t easily be noticed except when exposed to UV light and in most cases shines out extraordinarily.

The strong blue is the most discussed fluorescence (most discussed not common) between other grades, and you should have no reason to get a diamond with that high level of fluorescence this grade goes beyond the preference, and makes the diamond look cloudy (or hazy), we will see more about this shortly.

There is no direct answer, because it depends on the diamond color, and your preference as well! 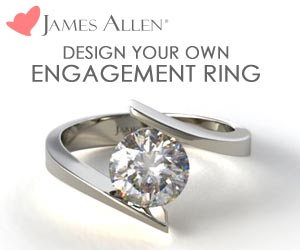 We mean diamonds that are between D & G grades, if you’re going with a diamond in this range, you better stay away from fluorescence, although you might get a 10-15% discount if the fluorescence was V. Strong in a D-Color diamond for example, why?

Because these diamonds are colorless or near colorless as we saw in the diamonds colors chart, and since fluorescence will glow some color, it might affect the diamond total color appearance, thus, it’s mostly will be considered a defect to the diamond.

Strong, Very Strong Blue Fluorescence in these colors should be avoided, such diamonds will most probably look either hazy, cloudy, or milky, and you don’t want any of these!

For Medium fluorescence in this grade, while it might not affect the diamond appearance, but there is no benefit of getting this grade, it will not improve the diamond color, so in most cases, you better stay away of this as well.

When looking for one of these grades, you want to look for a diamond with faint, or even medium fluorescence, why?

Because this can (but is not guaranteed) give your diamond a look like it has a higher (whiter) color (up to 1 level, a J-Color diamond may look like an I for example), it might make your diamond look more colorless, but because it’s always a preference, try to buy from a store that offers money back guarantee in case you didn’t like it.

That’s why we always recommend getting diamonds online from major stores like James Allen, Blue Nile or Whiteflash.

Don’t go crazy with this and if you can’t find one go for None or Faint fluorescence.

After seeing some advantages for getting diamonds with some fluorescence, some would ask if it’s a good idea to get a diamond with blue strong fluorescence.

In almost every diamond I’ve seen, diamonds with strong blue fluorescence looked hazy, so whether you’re going with a colorless diamond, or even higher colors, you better avoid this level.

What GIA Says About Fluorescence?

In a famous study, the GIA tried to minimize the impact of fluorescence and stated that under normal lighting conditions (more on this below) even a strong blue fluorescence is usually impossible for the average diamond buyer to pick up.

If in fact that were the whole story there wouldn’t be much to worry about and nobody would pay much attention to it.  The truth however is not so clear cut.

As we’ve seen above, fluorescence refers to a glow that some gems, including diamonds, give off when subject to UV (UltraViolet) lighting.  This glow can be weak, or faint as it referred to in the diamond industry, medium, or strong.

Now you are probably thinking that since you don’t hang out at night clubs you shouldn’t care about this, but the fact is that contrary to the GIA, fluorescence can have a couple of other impacts on your diamond: 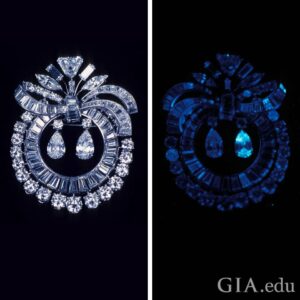 2)   Fluorescence tends to improve the appearance of diamond color. So a diamond with an I color may look better if it has a Medium Blue Fluorescence. (this is actually referenced in the same GIA study)

This of course is nonsense, and the term is actually banned by US FTC. If your jeweler tries to use this term on you- walk out and find another store, even better, buy your diamond online.

In general these rules apply to those wisely buying online as opposed to in person. Since you won’t be seeing the diamond upfront you these are good rules of thumb that you can use in making your purchasing decisions.

If you are buying locally at a retailer (and we don’t recommend this since you can save a bundle online) then go with your instincts and if you find a diamond you like – even if it has fluorescence – don’t feel that you shouldn’t buy it because of this. 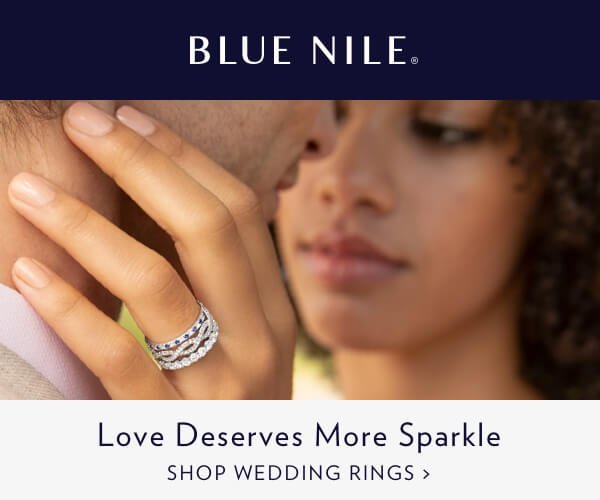 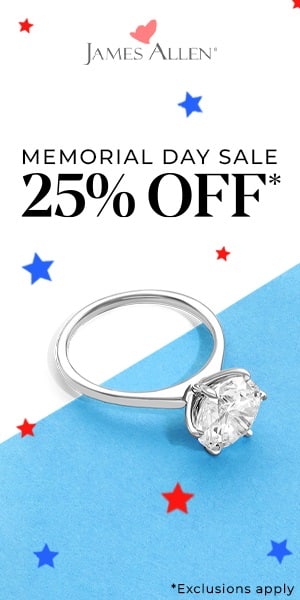 Disclaimer: We provide all this content for free, but we get commissions (from vendors) for sales generated by links in this post

Do you have a question that's not covered here?

Or you can't find the perfect diamond yet?

My name is Omar, and I will be happy to share with you +6 years of experience in diamonds industry, whatever budget you have, I will make sure you get the best diamond at the best price.

Totally Free of Charge, and here is Why!

Just drop us your email & message through this form, and I will get back to you ASAP. 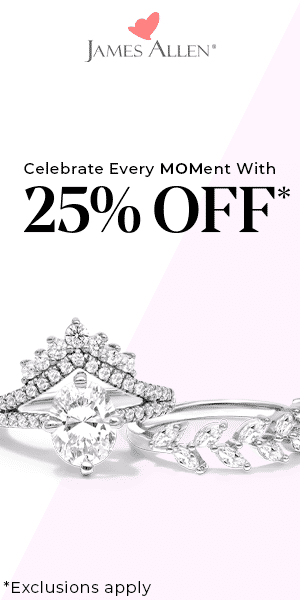